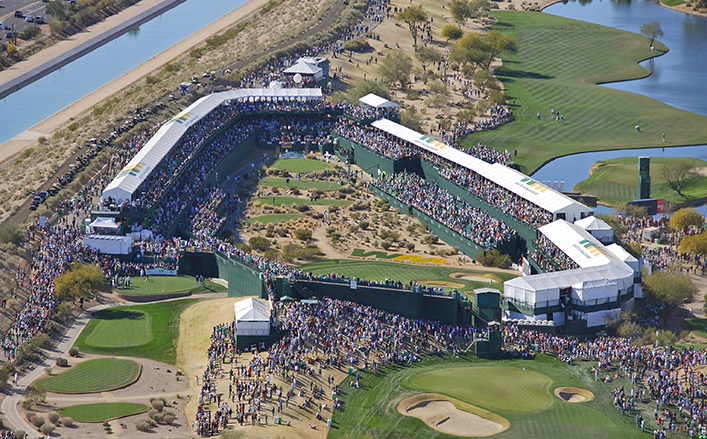 The most attended tournament in the PGA tour is expanding. The Waste Management Phoenix Open recently announced that they are building additional luxury suites and boxes around the 17th hole at TPC Scottsdale, right next to the well-known “loudest hole in golf.”

After a record-breaking 564,368 attendees at the 2015 tournament, “The Greatest Show on Grass” started looking for ways to up their game. Along with brand new suites and boxes, some of the corporate village tents will also be replaced. Known as THE place to network, mix, and mingle, the suites and boxes consistently sell out for between $55,000 and $110,000.

The infamously rowdy 16th hole, rumored to be the reason players like Tiger Woods have opted out of the tournament in years past, will also get an upgrade. The number of skyboxes will push 250 as up to 20 new upper-level boxes will be added near the green.

While a lively celebration is what the tournament tends to be known for, the Waste Management Phoenix Open also showcases great golf. Brooks Koepka scored his first ever PGA Tour title when he won the tournament in 2015. He played his last 47 holes without a bogey and went toe to toe with top players Bubba Watson, Ryan Palmer, Hideki Matsuyama and Jon Rahm to come out victorious. At age 24, we’re sure to see more of him at the TPC. The 16th hole didn’t disappoint, either. When Francesco Molinari shot a hole-in-one there, the crowd erupted.

Another attribute that the tournament is known for is its small environmental impact, especially considering the massive crowd size. For three years in a row, the Waste Management Phoenix Open has been a Zero Waste event. That means that 100% of all waste from the event was recycled, composted, converted to energy, or donated–an impressive feat that we can only hope other events take on, too!

Being right in the middle of all the action is definitely one of the benefits of living in Scottsdale golf homes around the TPC. Other Arizona golf communities like Desert Mountain and Grayhawk also host championship tournaments.

Trying to figure out which community is right for you? Contact The Matheson Team, experts in Arizona golf homes of all sizes in all communities.