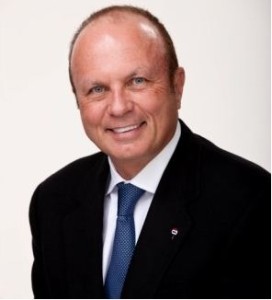 It’s “Throwback Thursday” a day when our team looks back at the business and the community to reflect on what was, and what is.
You may know I’m an avid golfer who grew up in Canada.  I have been in the real estate business for 38 years, and the last 19 years right here in Scottsdale.
From the very start, it is the PGA Skins game that interested me in Scottsdale and the then, new and premier Desert Highlands Golf Club.  In fact,  it convinced me Scottsdale was a great place to do business and Desert Highlands became my home.
The first PGA Skins Game was played in 1983 at Desert Highlands Golf Club airing on NBC stations across the Americas (yes, including Canada) with Vince Scully commentating.    The event took place on Thanksgiving weekend after the end of the official PGA Tour season.
While the PGA recognized the event, the purse was not included on the official money list.  It was intended to be a showcase for  the player-personalities and to highlight ‘the love of the game’.  I looked forward to the battle every year!
The event was played Thanksgiving weekend from 1983 – 2008 and produced some of the most memorable and personable moments in golf.    It is a tournament I’m hopeful will resume someday.  Look at our blog to learn about the best moments in PGA Skins history.
Besides the vibrancy of both the fans and the people in the skins tournament each year, the other difference between this event and other PGA tournaments is remarkable.  Only four golfers were invited to play in the tournament each year.
They played to win individual holes or ‘skins’ using a match play format.  Monetary values varied from hole to hole.
The golfer taking the hole with the best score won the money for that hole.  If two or more players tied for the win on a hole (halving the hole), the skin carried over to the next hole and so did the money. When, or if, the final hole is halved a playoff begins, until one golfer wins outright. 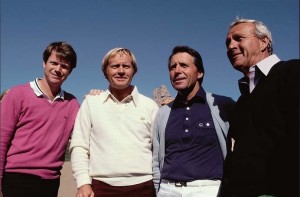 The first year, the fab-four of golf, Arnold Palmer, Gary Palmer, Jack Nicklaus and Tom Watson duked it out at Desert Highlands.  On 12, Arnold Palmer sunk a 40′ putt for birdie and won $100,000; a lot of money back then.
But it was Gary Player who took home the largest piece of the pie at the Desert Highlands inaugural event. He earned $170,000 that year.   $150,000 of his prize money came from a 4-foot birdie putt on 17.  It is said that Player was visibly shaking on the putt.  That $150,000 was more than he had ever won in a single year of his career.  Don Ohlmeyer told Arizona Golf, “He [Gary Player] was hyperventilating so bad he couldn’t take the club back on 18.”
What’s truly wonderful, as I think back on this ‘Throwback Thursday” is that not everything changes.  In 1983, and today, Desert Highlands remains a premier country club in Scottsdale.
I’m still an avid golfer and Desert Highlands is one of my favorite courses in town. Another thing that remains is the wonder of Scottsdale.
Scottsdale is one of the best places in the world to live, work and play and I’d love the opportunity to show you and your family the amazing communities of Scottsdale.  We are your Arizona Golf Home and Scottsdale Real Estate specialists.
Reach out to us for more information on homes for sale and the community.
Don Matheson
Realtor | Founder
The Matheson Team – RE/MAX Fine Properties
21000 N. Pima Rd., #100, Scottsdale, AZ 85255
480-405-4228
[email protected]
[gravityform id=”1″ name=”Contact Form” title=”false” description=”false”]