Home > The Thunderbirds: the organization behind the Waste Management Phoenix Open

The Thunderbirds: the organization behind the Waste Management Phoenix Open

The Thunderbirds, a 79 year old organization of volunteers in the Phoenix area, are synonymous with the Waste Management Phoenix Open, which they have run since 1939.  Both the PGA event and direct donations fund the group’s Valley based philanthropic activities that benefit children’s charities and young athletes.

We are Scottsdale real estate agents who specialize in golf community real estate.  Contact us to learn more about our area and receive information on homes for sale.

The Thunderbirds got their start in 1937 as an off shoot of the Phoenix Area Chamber of Commerce. The Chamber, seeing population and tourist growth, recognized the need for a team to focus on promotional events in the area.
Five local executives were selected by the Chamber to start up the group.  They called themselves the Thunderbirds based on the thunderbird emblem of the Phoenix Chamber, derived from American indian symbols.
In 1937 and 1938 the Thunderbirds hosted the Fiesta del Sol.  It was a week long event that included a rodeo, bands and dancing.
After 2 successful years of the Fiesta, the city asked the Thunderbirds to expand their reach and become the official sponsor of special events in the area.
Consequently, each of the original five committee members selected 10 men between the ages of 30 and 45 to work on their committees.  The total active membership of the group grew to 55 members, where it is today. 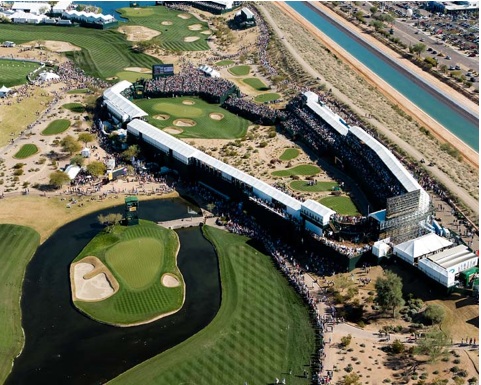 The infamous 16th hole of the Waste Management Phoenix Open

How The Thunderbirds became involved with The Phoenix Open
The Waste Management Phoenix Open actually started in 1932 as the Phoenix Open.  It had a hiatus between 1936-38 and in 1939 Thunderbird and avid golfer Bob Goldwater re-started the event, inviting his friends Bob Hope, Ben Hogan and Arnold Palmer to play.

Bob Goldwater, now considered “the father of the Phoenix Open,” did most of the legwork himself that first year, but after seeing the success, the entire Thunderbird team got behind Bob. The Thunderbirds set the foundation for what today is one of the biggest golf events in the world.
Proceeds from the Waste Management Phoenix Open and private donations are the primary sources of income that fund the philanthropic work of The Thunderbirds.
The Thunderbirds Mission and Charitable Activities
The Thunderbirds’ mission is to assist children and families to improve their quality of life.  Their giving is aimed at benefiting organizations based in the area or with significant presence in Arizona.

Much of the proceeds from the Phoenix Open benefit Boys and Girls Clubs, and The United Way and local athletes of the Special Olympics.   From caring for the underprivileged or those with serious health challenges, to helping young athletes striving for the Olympics, The Thunderbirds are focused on making a difference.

For 34 years the Thunderbirds have sponsored “The Thunderbird Collegiate Invitational.”  The event is considered by many as the Phoenix Open of collegiate golf.
Many pros have gotten their start through the collegiate event including Bobby Clampett, Corey Pavin, Dan Forsman, Howard Twitty, Jim Carter, Notah Begay, Phil Mickelson and Steve Jones.  Proceeds from the event go to golf programs at Arizona State University. 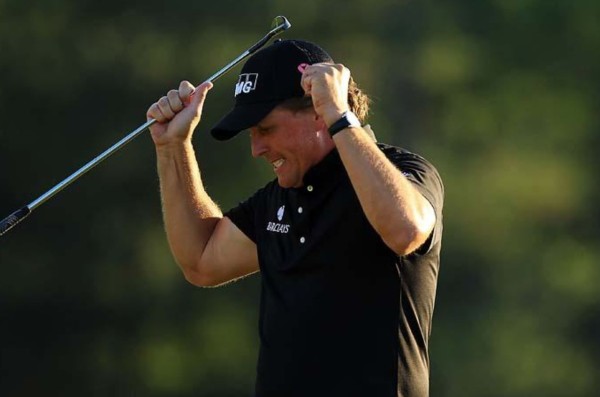 Phil Mickelson got his start at the Thunderbird Collegiate Invitational (credit: Getty Images)

In addition, The Thunderbirds sponsor the Junior and Senior Golf Classics which are the core of a very impactful junior golf program in the United States.  PGA and LPGA superstars like Billy Mayfair and Danielle Ammaccapane were both part of the program.
In partnership with the American Junior Golf Association, The Thunderbirds host the annual Thunderbird International Junior at Grayhawk Golf Club.  This event brings junior golfers together from all over the world.
The Thunderbirds charitable records include:

The Thunderbirds Membership
Thunderbird membership is limited to men who demonstrate a sincere interest in sports and are dedicated to community affairs. Their activities are under the supervision of the Big Chief and Thunderbird Council.  Becoming a Thunderbird requires nomination from two active members, then the active members vote on whether to accept the nominee.

Upon reaching age 45, Thunderbirds move from Active status to Life Member.  They are relieved of continuous duties but lend a hand where it’s needed.  There are 55 active and more than 250 life members of the group today.

Tom King was elected by the group as Big Chief (president) for the 2014-2015 fiscal year.  John Bridger is the Executive Director.  The 2015 WMPO Chairman is Danny Calihan with Dan Mahoney assisting.  The rest of the membership roster is not published.