Home > The Cowgirl Who Became a Justice: Sandra Day O’Connor exhibit in Phoenix

The Cowgirl Who Became a Justice: Sandra Day O’Connor exhibit in Phoenix

Lazy B Ranch was a typical cattle ranch near Duncan, Arizona where an atypical little girl went from ranch life to bench life over the course of several decades.
Head down to central Phoenix where you can explore the interactive exhibit of The Cowgirl Who Became a Justice: Sandra Day O’Connor. The exhibit runs through May 23rd at the McClelland Irish Library at the Irish Cultural Center. 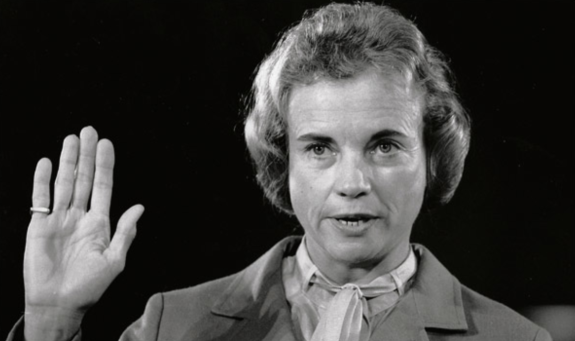 Walk through history, as her life starts out on an arid desert cattle ranch. O’Connor later attends law school only to be told after graduation that the only position available for a women in the legal profession was that of a legal secretary. Read about her many personal accomplishments in the field of law as an elected official and judge in Arizona, serving as the first female Majority Leader in the United States as the Republican leader in the Arizona Senate, and on to become the first female to become a Justice in The Supreme Court of the United States of America, the highest judicial body in the country
Was it the challenges a small girl faced growing up on an Arizona cattle ranch that would mold the persona needed for such lofty achievements, or was it just an innate spirit and personality? Maybe a combination of both? You’ll form your own opinion as you browse the connect-the-dots retrospective timeline of her life in the exhibit.
One opinion that we all concur, Justice Sandra Day O’Connor has left an indelible imprint, not only on Arizona, but on the nation as a whole.
Admission is $10 and the library hours for spring are 10:00 am – 3:00 pm, Tuesday through Saturday, and 3:00 pm – 8:00 pm on Wednesday evenings.
Thinking about moving to Scottsdale, Arizona? Contact me at 480-405-4228 to learn more about our area, and to make an appointment to view Arizona golf homes for sale.
Don Matheson
Realtor | Founder
The Matheson Team – RE/MAX Fine Properties
21000 N. Pima Rd., #100, Scottsdale, AZ 85255
480-405-4228
[email protected]
[gravityform id=”3″ name=”Custom Home Valuation” title=”false” description=”false”]
Back To Blog