Take a break from looking at Scottsdale area golf course homes for sale with The Matheson Team  and treat yourself to a day trip to the Tonto National Monument.  The Monument showcases prehistoric archeological artifacts and historic remnants of the Hohokam and Pueblo people and their dwellings from the 13th, 14th and 15th centuries.
You could say this is a tour of what real estate in Arizona used to look like centuries ago! 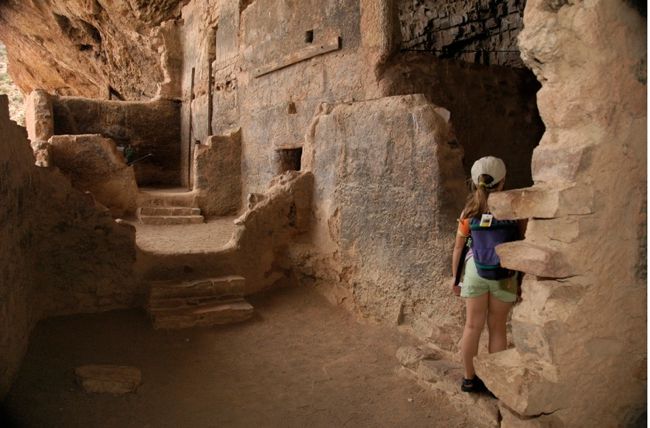 A bit of history
The “Monument” is the Upper and Lower Cliff Dwellings found at the site.  Initially, inhabitants occupied the area that is now Roosevelt Lake.
At some point in the mid 1300’s water resources dwindled, and inhabitants ceased farming the land and started hunting.  This required them to move to higher ground, and as a result, they began making their homes in the cliffs. 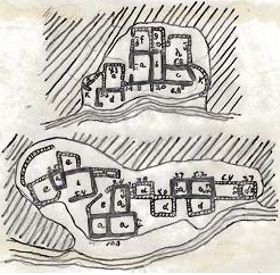 It’s assumed that a complete shift of the eco-system forced the last migration of cliff-dwellers around the 1450’s.  The true causes are unknown to this day.
The site largely went undiscovered for centuries. Remarkably the first documented discovery of the dwellings (around the 1870’s) came from the diary of Angeline Mitchell. Her account describes encounters with native indians, wildlife and cattle.
The first images of the dwellings were done by Adolf Bandelier in 1883, and then the secret was out.  As the area’s population again started to increase and the Roosevelt dam construction was announced, people began flocking to the site.
Artifacts and structures were stolen or destroyed.  As a result, in 1906 President Roosevelt signed an act to preserve the first 460 acres of the area.
Today the Tonto National Monument is run by the United States National Park Service.  It was finally transferred from the state of Arizona to the federal government in 1933 to ensure the site’s preservation longer term. 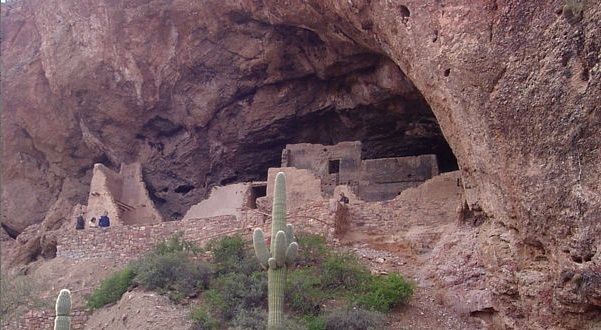 Heading up the trail to the Lower Cliff Dwelling

What to do at the Monument
We recommend, at minimum, you stop in the visitor center and museum, see the history video overview of the park and take the trail to see the Lower Cliff Dwelling. The paved path is 1/2 mile uphill.
Wear shoes and gear for walking and bring along a bottle of water.  It will take about an hour for the walk roundtrip.  Leashed pets are allowed on the lower trail.
The Lower Cliff Dwelling is truly what remains of a town or village that’s more than 500 years-old.  When the Hohokam and/or Pueblo people inhabited these cliff-side homes, Roosevelt Lake (to the east) was farmland and housing.
There are 8 areas to view in the lower cliff.  The park service calls them rooms, but in fact many are separate homes and the town village.
The multi-story homes at the opening of the cliff have worn away over time.  Yet, as you go deeper into the dwelling, the remnants are well preserved.
Building materials used to construct these dwellings included saguaro ribs with clay for roof construction and clay floors to soften the surface for sleeping and create a fire resistant surface for cooking.  Doorways are smaller than the people of the time were, and built that way to keep the heat in.
There is an off-shoot of the Lower Cliff trail called The Cactus Patch adding 1/4 mile to your hike and giving you a better sense of the people who lived in the area.  You’ll see their drawings in the rock showing cacti and native plants.
To take the excursion to the Upper Cliff Dwelling, reservations are required and you’ll need to plan ahead.  Hikes to the Upper Cliff are challenging as you ascend and descend 600 feet.  The upper cliffs can only be accessed with a guide.
There are 32 rooms/areas to explore in the upper cliff dwelling.  You’ll get of glimpse of how drinking water was collected and garbage was disposed of back in the day.
Different architectural styles and building materials were used in the Upper Cliff area than the lower. Split agave, flower stalks and layers of grass with clay were used to make posts.  Some of the materials in this area date back to 1346.
Trail tours of the Upper Canyon take place between November and April a few days a week.  Book before you travel and as early as you can by calling (928)467-2241 because tours fill quickly.  The hike is 3 miles round trip and takes 3-4 hours including stops with your guide.
Pets are not permitted on the Upper Cliff trail.
The Upper Cliff trail is great for people who exercise and hike on a regular basis.
Directions from Scottsdale
To get to the Tonto National Monument from Scottsdale, take Shea Boulevard east about 15 miles to State Highway 87 (the Beeline).  Turn left (north) onto the Beeline for approximately 48 miles to State Highway 188; at 188 turn right (south).
The monument is another 35 miles south on 188 in Roosevelt, Arizona – about 100 miles total.  If you prefer a less scenic route; take the 101 South to Highway 60 East to State Route 188 north to Roosevelt.
Enjoy your tour of Arizona history.  We’ll look forward to finalizing the offer on your new Arizona golf community property when you return.  We are your go-to resource for community and real estate services; call us at 602-694-3200.
Reach out to us for more information.
Don Matheson
Realtor | Founder
The Matheson Team – RE/MAX Fine Properties
21000 N. Pima Rd., #100, Scottsdale, AZ 85255
480-405-4228
[email protected]
[gravityform id=”1″ name=”Contact Form” title=”false” description=”false”]