The PGA Tour Charles Schwab Cup Championship has developed into a North Scottsdale tradition at Desert Mountain Club. Starting next year, the season-ending tournament will move to the Phoenix Country Club at 7th Street and Thomas Road near downtown. 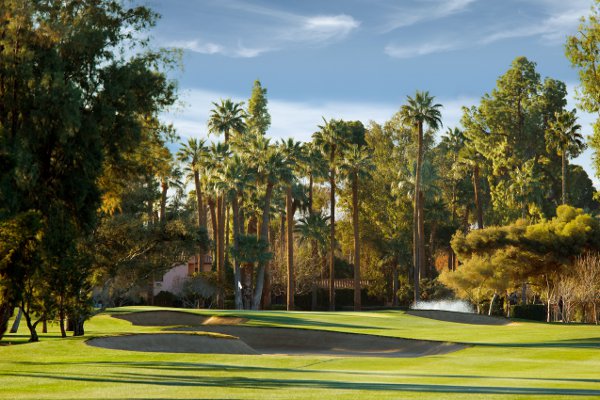 The Phoenix Country Club will take over hosting both the 2017 and 2018 tournaments. While this golfing landmark has not hosted a professional golf tournament in over thirty years, it was actually the original golf club of the Phoenix Open when it teed off in 1932. The Arizona Country Club (Thomas Road and 56th Street in Phoenix) and Phoenix Country Club alternated hosting the tournament from 1955-1971, then it stayed at the Phoenix Country Club from 1971-1986. The tournament moved to its current home at the Tournament Players Club in Scottsdale in 1987.
Founded in 1899, Phoenix Country Club is one of the oldest golf clubs in the West, rich in Arizona and golf history. Senator Barry Goldwater was an influential member and his brother Bob Goldwater was “father” of the Phoenix Open. The original course was designed by Henry Collis; Valley resident Tom Lehman and John Fought redesigned the original course layout in 2002.
Champions Tour President Greg McLaughlin is looking forward to the move downtown. “Phoenix Country Club is a wonderful venue on which to contest our most prestigious event of the year,” McLaughlin commented.
The 2016 Schwab Cup will go out with a bang on the Cochise Course at Desert Mountain Club on November 10-13, 2016. This will mark the fifth year that the Jack Nicklaus-designed master planned golfer’s paradise hosts the tournament (Desert Mountain hosted in 2011, 2012, 2014 and 2015). As we mentioned before the 2015 tournament, there had been rumors and uncertainty about where the tournament would end up in 2017 and beyond. There were some thoughts that it would even more west to California.
Keeping such a high profile professional golf tournament in the Phoenix area is a hug benefit for all Arizona golf course communities. The Phoenix Country Club gets a chance to shine in the spotlight once again while Desert Mountain gets a break from tournament hosting responsibilities, which many residents and players will appreciate. The community strives to host limited events per year to keep the best interests of members in mind.
The Charles Schwab Cup Championship is the last professional PGA event of the Champions season and brings together the top 36 players for elite competition. This year will introduce the Charles Schwab Cup Playoffs, which will include a three-tournament series to determine the tour’s top player. The stop at Desert Mountain is the third and final playoff tournament. The player to look for this year is Bernhard Langer, the defending champion from 2015 and a three-time tournament winner.
Living in AZ golf homes brings the action and top talent in the world to the fairways just steps from your home. Interested in browsing golf homes for sale in Scottsdale AZ or other Arizona golf communities? Contact AZ golf homes experts the Matheson Team today to strategize your moves.
Don Matheson
Realtor | Founder
The Matheson Team – RE/MAX Fine Properties
21000 N. Pima Rd., #100, Scottsdale, AZ 85255
480-405-4228
[email protected]
[gravityform id=”1″ title=”false” description=”false”]