The 49th NFL Championship game is taking place at the University of Phoenix Stadium on February 1st, 2015 and local celebrations and events are planned for the entire week before. The NFL has also moved this year’s Pro Bowl to the University of Phoenix Stadium, scheduled for 6:00 pm on Sunday, January 25.
This year’s Pro Bowl alumni captains are Hall of Fame Wide Receivers Cris Carter and Michael Irvin. Players for the game are being selected by the votes of NFL fans, players and coaches; so get in the action and vote for your favorites. 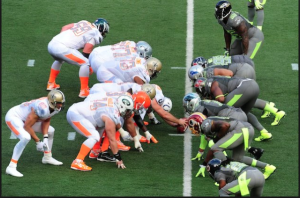 The first “Pro All-Star Game” was played in January, 1939 with all-stars selected from the 1938 season. The All-Star game was played after the league championship (not called the Super Bowl until 1965) and for the first 5 years the All-Star team faced the year’s league champion.
The All-Star game ceased during World War II due to travel restrictions. It resumed in 1950 and was renamed the Pro Bowl with a play off between the AFC and the NFC rather than the league champions.
For the first 21 years, the game was played in LA. The location was moved annually for the next 7 years, then in 1980 it moved to Hawaii for 30 seasons through 2009.
Last year was the first year that the game was not an AFC vs NFC face-off.  Instead, after votes are tallied, the alumni and playing captains select their teams by draft.
Buy tickets now for the 2015 Pro Bowl at University of Phoenix Stadium because this is the last time for the foreseeable future that the Phoenix metropolitan area will host the game. Beginning in 2016, the Pro Bowl is indefinitely scheduled to be played in Hawaii.
The Matheson Team is your go to resource for community information, events and Arizona golf homes for sale.
Reach out to us at 480-405-4228 or use the contact form below and we’ll get your home search started.
Don Matheson
Realtor | Founder
The Matheson Team – RE/MAX Fine Properties
21000 N. Pima Rd., #100, Scottsdale, AZ 85255
480-405-4228
[email protected]
[gravityform id=”1″ name=”Contact Form” title=”false” description=”false”]