Greasewood Flat, located off Alma School Road just north of Happy Valley, the historic restaurant, grill, bar, dance and general hang-out, closed its doors a few months ago.  Discussion around the restaurant and its proposed new location has turned from conversational to controversial.

History
In the late 1800’s, DC Ranch extended for thousands of acres in the Sonoran Desert of what is now Scottsdale.  Greasewood Flat was the bunkhouse for ranch hands who worked on the ranch.
In 1955, seeking a get-a-way from Scottsdale’s city life, “Doc” Cavalliere purchased 47 acres of the Ranch that included the bunkhouse and another wood and canvas building that became Reata Pass Steakhouse.
“Doc” and his wife, Marge, operated the Steakhouse well into their 60’s.  Then, in retirement, the couple closed the restaurant and opened Greasewood Flat as an entertainment spot for friends and family.
“Doc” passed-away in 2009, 11 days short of his 93rd birthday, and the family continued on with the tradition.  In 2013, however, faced with federal estate taxes for the land that the heirs couldn’t pay, the property was sold to Taylor Morrison Homes.
Future of the Land
In the agreement between the Cavalliere heirs and Scottsdale-based Taylor Morrison, Taylor will pay the tax obligations.  Taylor has proposed a general amendment to Scottsdale to rezone the property.
The proposal will change the land from commercial to residential use.  If successful with the zoning change, Taylor Morrison will build a development named Cavalliere Flats to honor “Doc” and Marge.
80 homes are on the drawing board for the community with natural desert terrain preserved. 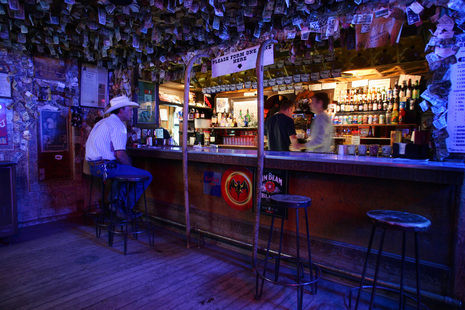 Future of Greasewood Flat
The family has crafted a plan to move the restaurant to 10 acres within a 120 acre parcel they own south of Dynamite at 128th Street.
While 4,000 Greasewood Flat patrons have signed the petition in support of the plan, just as many area residents are opposed to the proposal because of its proximity to the McDowell Sonoran Preserve and potential impact on wildlife, traffic and light noise.
The city planning commission is reviewing input on the proposal from residents and other interested parties.  Another hearing is scheduled for October 8, 2014.
The Scottsdale City Council is set to vote on the general amendment proposal on December 1, 2014.
As your Arizona golf homes experts, our job is to keep you informed on Scottsdale community and real estate information.  Reach out to us for more information on our area.
Don Matheson
Realtor | Founder
The Matheson Team – RE/MAX Fine Properties
21000 N. Pima Rd., #100, Scottsdale, AZ 85255
480-405-4228
[email protected]
[gravityform id=”1″ name=”Contact Form” title=”false” description=”false”]
Back To Blog