The Champions Tour, known formerly as the “Senior PGA Tour”, is for players aged 50 and above. This group includes golf greats Bernhard Langer, Colin Montgomerie, Kenny Perry, Tom Lehman, Fred Couples, Fred Funk and many others.
There’s a tremendous amount of history and math behind The Schwab Cup Championship.  It is a tournament within a tournament, so to speak.
The quest for The Charles Schwab Cup is a season-long event where the top 5 point earners (of the 30 top money winners) win a portion of the purse; $2.1 million this year. The winner of the Charles Schwab Cup Championship, the 4 day event that starts October 30th, takes home an additional $440,000. 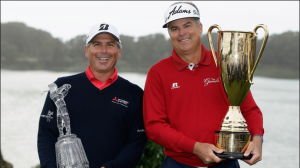 The tournament rewards consistency through the accumulation of points and the top 10 finishes at the 23 Schwab Cup events held during the season.  Kenny Perry is the defending champion this year after winning the event at the TPC Harding Park in San Francisco last year.
There is no half-way cut in The Charles Schwab Cup Championship tournament. All who start on Thursday finish on Sunday.
The Cochise course at Desert Mountain was designed by Jack Nicklaus and built it 1987.  It’s a challenging and breathtaking 7,019 yard course, considered by Jack himself to be one of the most beautiful courses in the world.
The course slope from the professional tee of 145, and the rating at 73.1 are key indicators of the precision needed for a good round.
Whether you’re watching the Schwab Cup Championship on TV, or come out to see the players in person, take a look at the four par-5’s, all considered to be signature holes of the course. Hole 7, a par 3 and hole 15, one of the par 5’s, are particularly interesting with a shared double greens and two different ways of approaching the pin on each.
Golf isn’t the only thing happening at The Charles Schwab Cup Championship. Additional activities include:

See the course map for more information.
Tour officials recently changed plans for the 2015 tournament: rather than going back to San Francisco, the tournament will again be played at Desert Mountain next year and in 2016.  Both the Club and the Tour officials believe this will help build a loyal base of fans, sponsors and volunteers.
It’s an honor for both the golf club and the host city when the PGA awards a tournament to a golf course.  It’s a testament to the beauty and challenge of the Cochise course, as well as the amenities available in the Scottsdale area for guests.
Looking to buy a home in one of Scottsdale’s golf communities? Reach out to me to set up a time to view properties.
Don Matheson
Realtor | Founder
The Matheson Team – RE/MAX Fine Properties
21000 N. Pima Rd., #100, Scottsdale, AZ 85255
480-405-4228
[email protected]
[gravityform id=”1″ name=”Contact Form” title=”false” description=”false”]