The Waste Management Phoenix Open is the largest spectator golf event in Scottsdale.  In fact, it may be one of the largest sporting events in the world.  In 2014, 563,008 spectators attended the 4 day event with over 186,000 attending Saturday’s play alone. 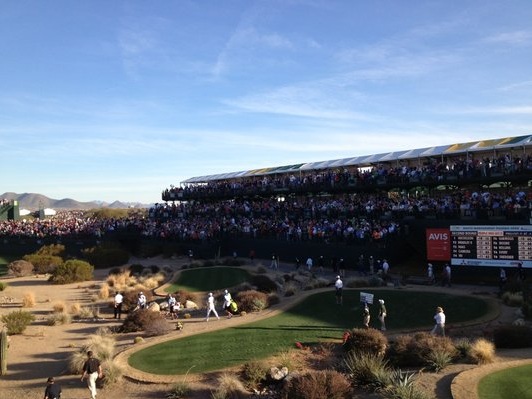 The famous 16th hole at the Waste Management Phoenix Open

Golf is the favorite pastime of The Matheson Team.  We look forward to the Waste Management Phoenix Open as much as the  pro’s and spectators do.  It’s a great time of year to work with us and check out homes for sale in the Scottsdale area.
The Waste Management Phoenix open takes place every year early in February.  The NFL and PGA now have an agreement to ensure the two events aren’t played on the same day. In 2009 when Phoenix was hosting the Super Bowl (and the Arizona Cardinals were playing in it), there were playoff holes still being played at the Open at the start of the football game.
While the name has changed over the years, the tournament has been played for 82 years (since 1932.) There was a three-year hiatus from 1936-38, and a one-year hiatus in 1943 during WWII when travel was limited.
By 1939, the tournament became well established when local resident and “Thunderbird,” Bob Goldwater Sr., took the lead in hosting the event at The Phoenix Country Club.  Goldwater printed the tickets himself, found sponsors and secured Phoenix Country Club as the venue.
Goldwater invited friends to the revived tournament. Those friends were Bing Crosby, Bob Hope and  Ben Hogan.
It was Byron Nelson, a 27-year-old up and comer, who won the 1939 tournament.  He received a $700 prize for first place.  Hogan took second place and won $450.  He was 12 strokes back. 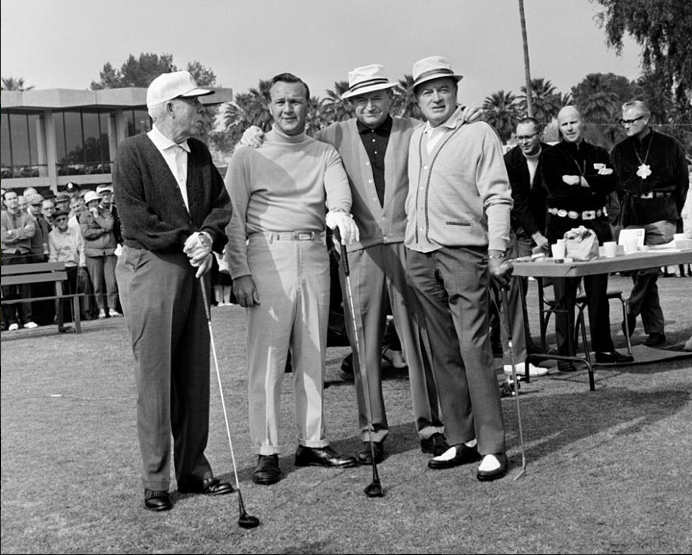 Hogan, Palmer, Goldwater and Hope at the Phoenix Open

In 1955 began the rotation of the event between The Phoenix Country Club and The Arizona Country Club, both in Phoenix.  As time progressed, the city sprawl and attendance growth at the event posed a traffic and parking problem for the tournament.
To relieve traffic and parking challenges, the Thunderbirds, the City of Scottsdale and the PGA began talking about creating a new venue, outside the city on a new course.
The Tournament Players Club (TPC) of Scottsdale was built and the tournament moved to its permanent home, The Stadium Course, at TPC in 1987.
Arguably the most popular hole for spectators to watch in golf anywhere in the world is the par 3 16th hole at the PGA Waste Management Phoenix Open at TPC.   The “Amphitheatre” atmosphere of the hole, created by the stands surrounding the tee box and the green, has created what is often described as “one big party”.
The hole is also unusual because fans are encouraged by electronic signs on the hole to turn up the volume.   The par-3 16th is considered an easy hole by PGA standards.  The fans cheer loudly for good shots, and they “boo” the poor shots.
Fans love sitting in the general admission seats on hole 16 because players throw sponsor swag:  golf balls, gloves, sunglasses, etc. into the stands for all to grab.  The corporate sky-boxes are very popular as well, with open bar food and drink service.
Notable moments on the hole include Tiger Woods hole-in-one in 1997 and Jarrod Lyle who aced it in 2011.  The gallery roared!
Because of his roots as an Arizona State University alum, Phil Mickelson is the most popular golfer at the open.  Phil actively engages with fans, one on one, as he plays his round.
Mark Calcavecchia had the tournament’s first lowest 4-day score in 2001 shooting 256 (28 under par) with 32 birdies.  Phil Mickelson matched Mark’s 256 record in 2013.
There have been 2 double eagles:

Four players have won the tournament 3 times – Gene Littler, Arnold Palmer, Mark Calcavecchia and Phil Mickelson.
The 1991 event was the first time the purse reached $1 million. Nolan Henke won that year taking home $180,000. Phil Mickelson leads the open’s money list with $3,694,782 over 24 tournament appearances.
Today, PGA TOUR stars compete for a $1,116,000 first place check, part of a $6,200,000 purse.
There’s a lot more than just the PGA tournament at the Waste Management Phoenix Open.  There are two Pro-Am’s where you can tee it up with the Pros: one before the event, and another the day after the event.  There are clinics, trick-shot shows by the pro’s, motivational speeches and, of course, The Bird’s Nest, which features top-notch entertainment nightly.
The Phoenix Open is called “The Greatest Show on Grass”.  The Waste Management Phoenix Open is a fan favorite as well as a player favorite.
The Thunderbirds work with Waste Management to organize the tournament to this day.  Portions of the proceeds from the Open are designated by the Thunderbirds for funding Special Olympics and other youth sporting activities in the Phoenix area.
Reach out to us for more information on the Scottsdale area, including information on golf communities.
Don Matheson
Realtor | Founder
The Matheson Team – RE/MAX Fine Properties
21000 N. Pima Rd., #100, Scottsdale, AZ 85255
480-405-4228
[email protected]
[gravityform id=”1″ name=”Contact Form” title=”false” description=”false”]