Monday night was the Arizona Cardinals‘ first game of the regular season. Despite a record day of rainfall in Phoenix, the sold-out game paid tribute to one of Arizona’s most loved quarterbacks, Kurt Warner, and the Cardinals pulled off a fourth-quarter come back to edge out the San Diego Chargers with an 18 to 17 win.
The Matheson Team loves golf, but we’re also big football fans, not only because of the action of the game, but because it signals the return of our winter residents when our real estate selling season really takes off and our area rocks. 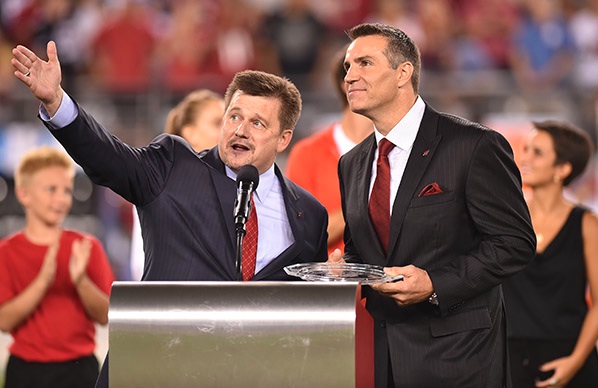 The win for the Cardinals was the icing on the cake for what was an incredible show on Monday Night Football.  Kurt Warner, former Cardinals quarterback, and well-loved local, was inducted into the Cardinals “Ring of Honor” at the University of Phoenix Stadium.
Warner brought the Cardinals to two play-offs and boosted the image of the franchise around the nation.
He is the 14th former Cardinal to be inducted and the 3rd who played for the Cardinals here in Arizona. The other two Arizona inductees in the “Ring of Honor” are Pat Tillman and Aeneas Williams.
As a side-note, the Cardinals are the oldest still existing team in the NFL.  Yup, that’s right…the oldest!
The Arizona Cardinals originated in Chicago in 1920 where they played until 1959.  In 1960 the team moved to St. Louis where they remained through the 1987 season. In 1988 the team moved to our area and were called the “Phoenix Cardinals” playing their first 12 seasons at ASU’s stadium.
In 1994, the team named changed to the “Arizona Cardinals”, better for soliciting support across the state.
In 2006, the team moved to the University of Phoenix Stadium in Glendale, which was completed the same year.  It is famous for its retractable roof and playing field.
With Monday night’s win, I have my fingers crossed that we’re off to a great start.  To catch some of this year’s action, here’s the Cardinal’s season schedule.
Their next game is Sunday, September 14 at 10:00 am MST when the Cardinals are at New York playing the Giants.
Reach out to us for more community information.
Don Matheson
Realtor | Founder
The Matheson Team – RE/MAX Fine Properties
21000 N. Pima Rd., #100, Scottsdale, AZ 85255
480-405-4228
[email protected]
[gravityform id=”1″ name=”Contact Form” title=”false” description=”false”]
Back To Blog