If you’re thinking of moving to the Scottsdale area and love watching sports, you’ll be excited to know about the numerous professional and collegiate sports teams we have here in Arizona.  To get you up to speed, here are 8 interesting facts about Arizona’s teams. 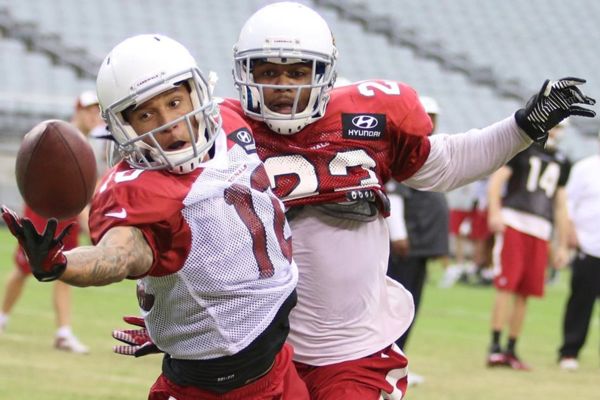 1. Before the Diamondbacks’ colors were “Sedona red, Sonoran sand and black” they used to wear purple, copper, black and turquoise.  The team changed their color scheme in 2007 in hopes of boosting merchandise sales.
2. The Arizona Cardinals have never won a Superbowl but made their first appearance in 2009 at the 43rd Superbowl against the Pittsburgh Steelers.
3. The Coyotes were founded in 1972, originally as the Winnipeg Jets of the World Hockey Association (WHA).  The Winnipeg Jets became part of the NHL in 1979 when the WHA folded, and the team was eventually transferred to Phoenix in 1996.
4. Since 1998, the Phoenix metro area has been able to boast that they are home to a major league team in the four dominant American sports – baseball, football, basketball, and hockey.  (1998 was the year that the Arizona Diamondbacks were voted into the National League.)
5. The Territorial Cup, a football rivalry between University of Arizona and Arizona State University, is certified by the NCAA as the oldest rivalry trophy in American college football.  The two teams first played in 1899.
6. The Phoenix Suns’s mascot — The Gorilla — was initiated into the Mascot Hall of Fame in 2005.
7. The Arizona Diamondbacks won the baseball World Series in 2001 against the favored New York Yankees.
8. The Phoenix Suns are the most winning franchise to have never won an NBA Championship based on their 46-year cumulative record including going to playoffs 29 times, 19 seasons with 50 or more wins, 9 trips to the Western Conference Finals, and appearances at the NBA Finals in 1976 and 1993.
As you can see, golf is not the only thing we do here in Arizona.  For more information on our area, contact the Matheson Team, your Scottsdale area real estate experts.
CONTACT US
Don Matheson
Realtor | Founder
The Matheson Team – RE/MAX Fine Properties
21000 N. Pima Rd., #100, Scottsdale, AZ 85255
480-405-4228
[email protected]
[gravityform id=”1″ name=”Contact Form” title=”false” description=”false”]